Founded with a lead gift from Edward R. and Helen S. Hintz in 2009, the Presidential Leadership Academy (PLA) was established with the goal of developing future leaders equipped with crucial critical thinking skills and the ability to act, lead and make decisions in a world filled with complex situations. The Hintz's have remained very involved with the Academy since its inception and take great pride in helping to mold Penn Staters into the leaders of tomorrow. 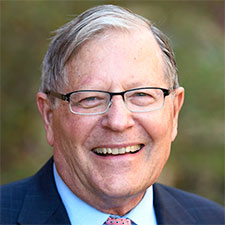 Ed Hintz is President of Hintz Capital Management, Inc. He previously served as President for HHR Asset Management, LLC, a private money management firm specializing in investment management for individuals, which he founded in 1974. A 1959 graduate of the Smeal College with a B.S. in Finance, he was named Alumni Fellow of the College in 1982 and Distinguished Alumnus of the University in 1987. He was elected President of the Board of Trustees in 2001 after first serving on the Board in 1994. He served as Chairman of the Grand Destiny Campaign from 1996 to 2001.